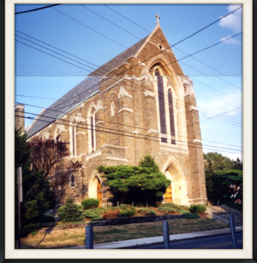 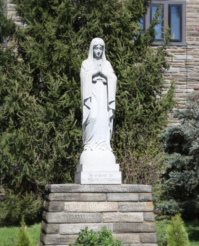 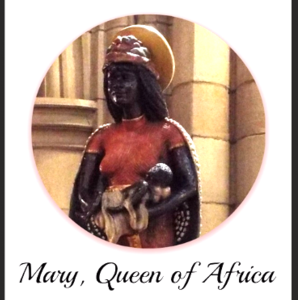 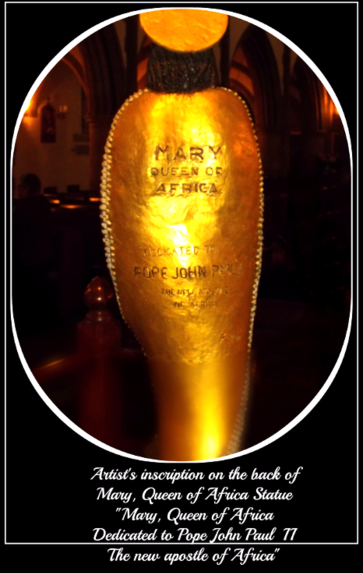 We are here presenting images of our parish's new addition,

the Mary, Queen of Africa sculpture.​

The story of its journey to BVM is below. 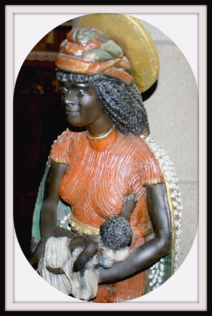 Our Mary, Queen of Africa Sculpture
We are so pleased to announce the arrival of the statue of “Mary, Queen of Africa” here at Blessed Virgin Mary Church.
It was donated to our parish, and received here with joy!
This statue is located in the front - right side of the church -  as one faces the altar.
The history of this work of art is interesting.
It was created by Reverend Leonard Carrieri, a member of the Missionaries of the Sacred Hearts of Jesus and Mary.

Father Carrieri had worked in Italy,  Argentina and the United States.   Born in 1914 in Italy, he entered the congregation of the Missionaries of the Sacred Hearts of Jesus and Mary in 1925 and retired in 1989.     In his midlife, he studied sculpture and created many works in this venue.  His works can be found throughout various countries.

His last years were spent in blindness, and yet he continued to sculpt.

Since many of his pieces incorporated Jesus, it was said that he truly “touched the face of God”.   Father Carrieri died in 2009.

The sculpture of Mary, Queen of Africa, was inspired by the many visits of Pope John Paul II to Africa from 1980 to 2000.

There is reference to this in the inscription on the back of the statue, which reads:

The colorful statue stands a diminutive 41 inches tall,  from its base to the tip of her halo.  It is vibrantly painted in bright colors.  Mary is dressed in a queenly African style gown, and she wears a colorful turban above her braided hair.

Her features are depicted much like a modern African woman.

Her swaddled baby, Jesus, is cradled in her arms, as He reaches up to His mother.

She wears a cape of turquoise blue that is golden on the back, and her waist is girded with a golden sash,

as she seems to be moving toward the observer.

Blessed Virgin Mary Parish has become a home parish to many nationalities.

and many countries of Africa are among the multitude of countries represented in our congregation.

Those of African descent have commented on the true ethnic likeness this sculpture of Mary, Queen of Africa, bears.

We invite you to come and see this lovely work of art.